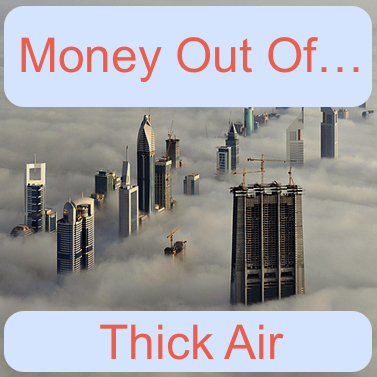 You've probably heard the saying 'printing money out of THIN air' - and most likely you've heard it regarding todays banksters. It's blamed for many things, most commonly the seeming ability by banksters to print money from nowhere...

This article challenges the concept money is purely brought into existence by keystrokes on a computer, and explores what is backing to today's 'money' and what that backing may be.

The THIN air concept largely comes from the mystery involved in the money creation process. It's a 'dark art' - ask banksters how they create money and if you are humoured with a response, it likely trots out textbook process according to the 'establishment'. Yet some of the juiciest textbooks are avoided.

If money was created out of thin air, you'd expect it could be created at ANY time, at the whim of the oligarch with the printing press.

Yet if you've watched the 5min video Bancorrupcty, or the 8 min video CONfinance, loaded with inconvenient textbook quotes, you'll appreciate banksters create money "in the act of lending" -  This  puts a timestamp on the process.

This is perhaps best surmised in the IMF Working Paper The Chicago Plan Revisited, by Jaromir Benes and Michael Kumhof:

… under the present system banks do not have to wait for depositors to appear and make funds available before they can on-lend, or intermediate, those funds. Rather, they create their own funds, deposits, in the act of lending. This fact can be verified in the description of the money creation system in many central bank statements, and it is obvious to anyone who has lent money and created the resulting book entries.

Or for simplicity - Money Banking & Monetary Policy… Federal Reserve Bank of Dallas, May 2007:

Banks create money when they lend it.

"When they lend it" - there's the timestamp. It doesn't say before they lend it, it says WHEN they lend it. So the ' money out of thin air' concept is now tied to a point in time... the time when money is borrowed.

This introduces a second party. The logical question to ask is; "could money have been created WITHOUT the borrower?" If not, we are getting into 'grey areas' or you might say 'money out of THICK air.'

Breaking the process down even further, in Modern Money Mechanics… Dorothy M. Nichols – Federal Reserve Bank of Chicago, May 1961, it reads:

What they do when they make loans is to accept promissory notes in exchange for credits to the borrowers’ transaction accounts.

Again, the timestamp states "WHEN they make loans". Here a promissory note is exchanged.

My research found that banks will accept promissory notes, typically from companies, when that company can offer up some form of collateral for the promise. Seemingly otherwise the promise is empty.

This makes sense. The notion that some form of collateral must back the promissory note seems logical.

A Typical Loan Scenario - How Collateral Is Secured

Here's a typical scenario, you go to the bank and ask for a loan. The bank gets your promise you can repay them and they register a secured interest in your collateral, e.g. house, car, boat etc.

The bank becomes the Secured Party, a car is the Collateral, and you act as the Debtor. Seems pretty simple... right? 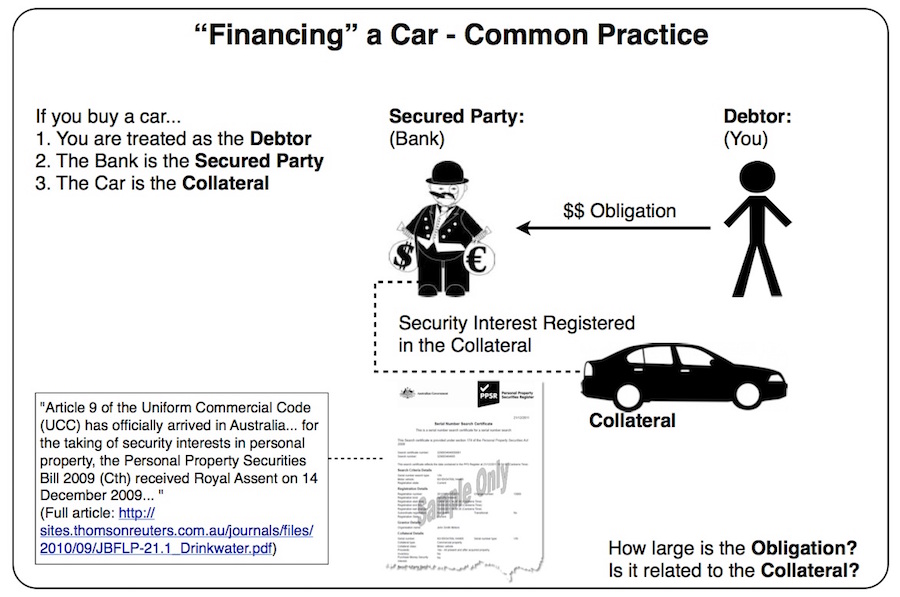 If you borrowed $40,000 to buy a car, that's worth $40,000, the bank registers its interest in your car until you have repaid them their $40,000. The document that records the interest in collateral is called a Financing Statement.  The registries that record these Financing Statements include various Recorders of Deeds like this one in Washington DC making use of the Uniform Commercial Code (note website has changed since originally posted).

In researching whether the UCC applied in Australia, I went looking for examples of obligations applicable to Australian companies. It seemed logical that if a Financing Statement bound an Australian Company, the UCC must be operative in Australia.

What unfolded was a series of Financing Statements recording the Federal Reserve Bank of New York as Secured Party, the big four Australian Banks (independently) as Debtor, and the Collateral being basically everything the bank owned or would ever own.

These Financing Statements were found on the Washington DC Recorder of Deeds website (note website has changed since originally posted). There were over 80 others associated to banks around the world:

If the registered interest in the collateral is proportional to the obligation, consider the size of the obligation owed by Australia And New Zealand Banking Group Limited to the Federal Reserve Bank of New York:

All accounts, chattel paper, inventory, equipment, instruments, investment property, general intangibles, documents, and all assets, now owned or hereafter acquired, that are identified, from time to time, by Debtor, to Secured Party in writing, by electronic means (including by CD Rom) or by any other means agreed by the parties, as collateral securing the obligations of Debtor to Secured Party under a written agreement between the parties, and all proceeds thereof; and all collateral, guarantees, letters of credit, surety bonds, and other supporting obligations pertaining to the foregoing, and all proceeds thereof.

The magnitude of the Collateral that is secured by the Federal Reserve Bank of New York is essentially everything.  How massive is the loan that requires registration of that much collateral? 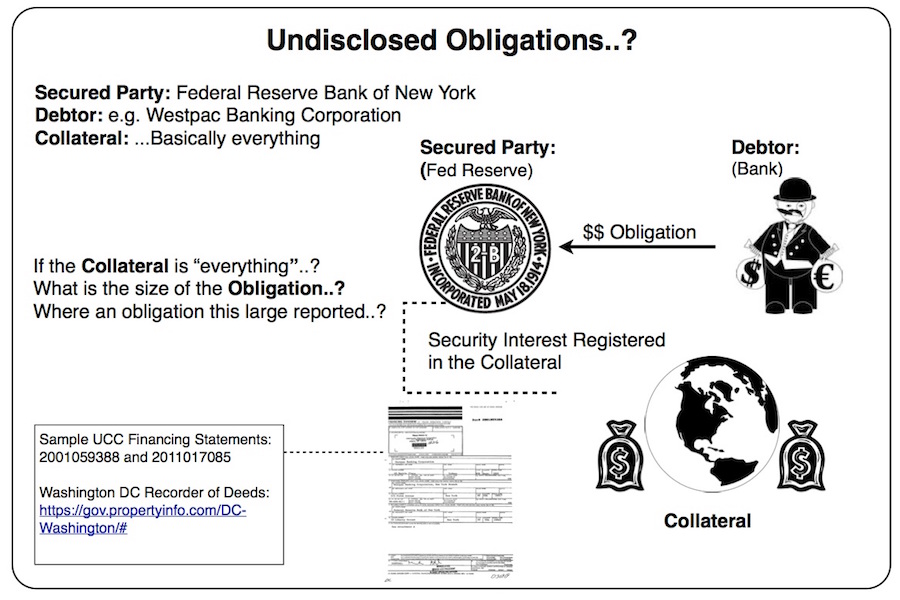 When you apply to borrow money, record is made against your credit report. You'd be expected to record those borrowings on any 'Statement of Financial Position' if being assessed for another loan.

So it would seem logical that these financing statements from the Federal Reserve Bank of New York , or the obligations they depend upon, would be reported to shareholders of these banks?

Auditors were contacted for one of these Australian banks requesting assistance on locating where in the banks' annual reports the obligations could be found.  Silence confirmed they were unreported.

Exploration Of The Secured Collateral

So what is it about such large amounts of secured collateral that they remain unreported... like a black budget out of US Congress? Perhaps further investigation into this collateral is warranted.

Most items within the secured Collateral are common terms... except Chattel Paper. Are there any coincidences that 'Chattel' traces back to CAPUT, CAPITALIS, CAPITALE? Is this similar to the ALL CAPS name illustrative of an artificial person?

"Compare with CATTLE..?" - Any alarm bells ringing yet?

Chattel Paper is defined within the UCC as:

No points for guessing the keyword in that definition... Goods are defined as:

"Goods" means all things that are moveable at the time of identification to a contract for sale. The term includes future goods, specially manufactured goods, the unborn young of animals, growing crops, and other identified things attached to realty as described in Section 2-107. Article 9, Part 1, 9-102 (44)

Seems odd farmers would rush to their accountant to advise there are more goods on the way once the bull has come back from visiting the cows...?

These goods do not exist yet - they are a future 'value'. They may or may not eventuate, yet they are treated as goods.

An Example of Pledging Future 'Value'

As wrong as it sounds... humans have been regarded as CAPITAL - just ask Bill Clinton - and pledged as Collateral. Notice in this linked Financing Statement - it records the Collateral "As all real men with hands and legs..."

Count the number of zeros in the amount of the Secured Interest - that's a big number.

Many have written about this too; e.g. Judge Dale and David Robinson. Judge Anna von Reitz writes:

At the March 6, 1933, Conference of Governors meeting, the Governors — merely corporate officers of franchises of the bankrupt United States of America, Inc. — pledged the “good faith and credit” of “their States and the citizenry thereof” to stand as sureties for the debts of the United States of America, Inc. during its bankruptcy reorganization.

People are being pledged as Collateral. So what is the mechanism for recording this collateral and when? If a future value is pledged, wouldn't it make sense to begin recording this future value as early as possible... maybe in the registration of birth process?

Google 'Birth Certificates printed on Bond Paper by the American Bank Note Company' and see for yourself.

Seemingly people's future value is registered at birth, recorded on bond paper and pledged as security. Worse, a new entity seems to be created and you are conned into acting as that entity for the rest of your life.

What Happens To Birth Certificate Bonds? 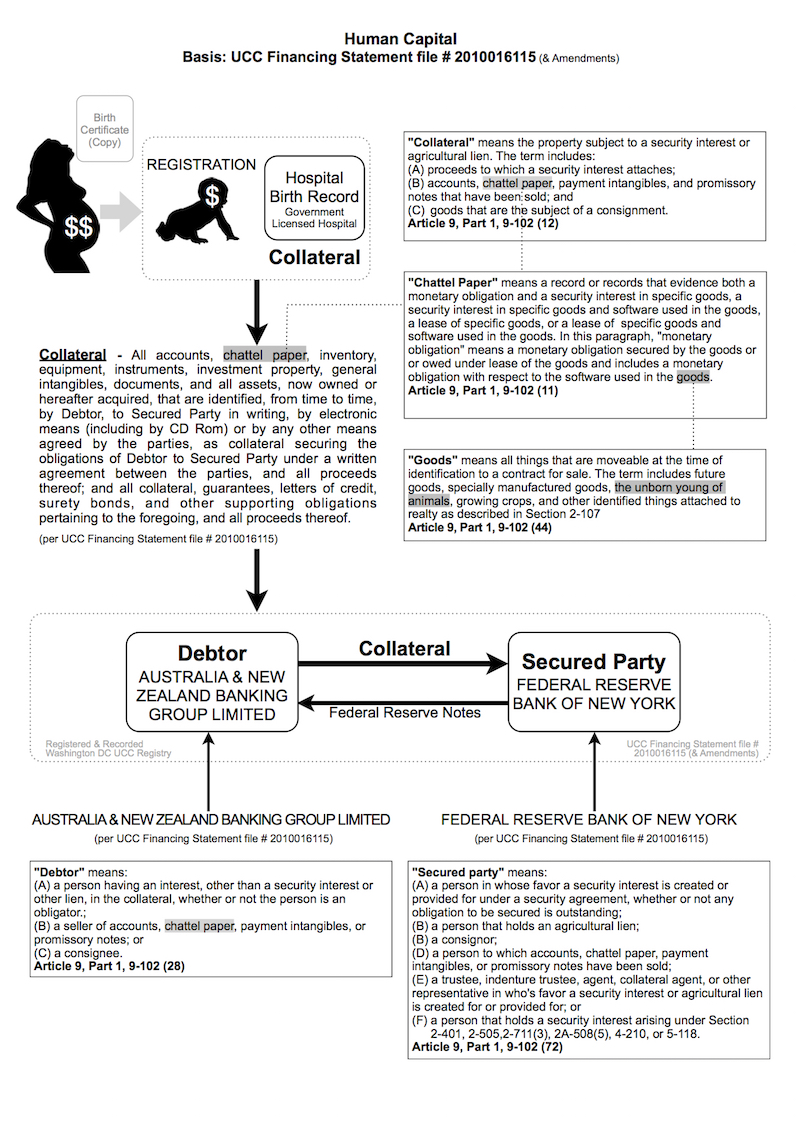 If the Birth Certificate becomes a bond, registered with 'government'... what happens next? Let's consider two topics:

When borrowing takes place, there's a debt. Is it too logical to assume that the National Debt is created by borrowing money at interest? Contrast this to money printed through the people's treasury where the people retain ownership of the infrastructure it is spent on. When the premise of borrowing is accepted as the only way 'government' gets money, it's no wonder people are married to the idea of paying taxes.

What if banks buy 'government' bonds as an investment? Is this the paper trail from the Federal Reserve Bank of New York through to the 'governments' around the world... all backed by the future value of the ... oops  sorry, people?

Is your future value, registered and recorded at birth, acting as a form of collateral used to back the money created by banks "in the act of lending"? This is why I've termed the phrase "money out of THICK air" - there appears to be more to the money creation story than first appears.

If that's how it works, it's all based on unearned value and an inverted monetary system. Far from sanctioning today's money creation process, this article is intended to stimulate thought on the subject.

Consider the consequences of pledging 7 billion people's worth of future value.

Whether it's money from THIN air or money from THICK air... if the original concept of money; being a token representing energy and effort expended in the production of something of value, is corrupted, who benefits? 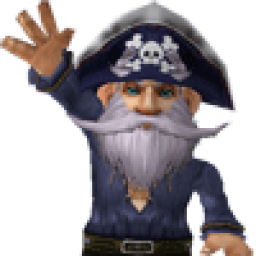 Creator of the documentary What The FUQ - Frequently Unanswered Questions of the "Australian Government" and website Truth-Now.net
Scott is a truth seeker who's move the USA with his wife Deborah Pietsch. Together they founded www.TranscendTheMatrix and www.WarriorOfLightMinistries.com

Test your knowledge of government in Australia.


What The FUQ? – Watch The 2min Trailer

Receive an email when we publish a new post

Test your knowledge of government in Australia

Please log in again. The login page will open in a new tab. After logging in you can close it and return to this page.