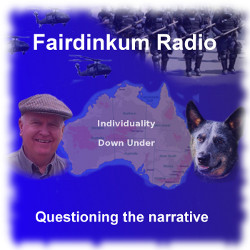 Discussed within the interview are the psychological issues that underlie search for truth. Some of the most passionate truth-seekers engage in ‘telling’ government they are not legitimate. Consider the effectiveness of this type of communication.

Do people shut down, do their eyes glaze over as they think to themselves “here’s another nutter that thinks the Australian Government is a corporation”?

Do your own family and friends lose interest in your conversation? What is it about your communication that is not successful? It’s a two way street. You’ve heard people called ‘great orators’ – how’s your communication?

For many people the validation of government authority challenges all the ‘education’ they’ve had in their lives. To hear something different is not easy. People create barriers to any contrary information. They will shut it out with throw-away phrases such as:

Likely there’s a fair degree of emotional charge included… Consider the delivery of the phrase “You’ve got to be joking.” Imagine Steven Hawking delivering the phrase with his computerised and unemotional voice, then picture Alex Jones when he’s in full swing saying the same. How often do you encounter ‘shut down’ type communication loaded with the emotion of disbelief or ridicule?

The approach taken that led to the documentary What The FUQ? – Frequently Unanswered Questions of the “Australian Government” was questioning – not telling. Asking people in government was thought to prompt thought instead of instant rejection based on prior programming.

The Importance of Identification

Another element of today’s truth-seekers is to engage with aspects of the system that are unlawful, illegitimate, fraudulent, criminal etc downstream of an event that previously identified them as impostors.

To engage in the details afterwards, or downstream of the act that made them impostors, is surely to ignore their unlawful creation, whilst you focus on an actions they perform.

The danger in engaging as such is to accept the department as having lawful authority when they do not.  Consider the following:

The point here is that we perpetuate the idea there is only ONE government if we say THE Commonwealth of Australia is a corporation, whereas when there are TWO, it is much more obvious to newbies that one is unlawful.