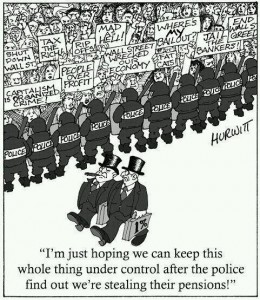 Mention the idea that banks transform a promise to pay into cash to most people and they’ll look at you sideways as if you’ve been drinking the ‘cool-aid’.

Money started out as a token to represent value. Men and women would do work, like growing potatoes, catching fish, building houses etc and trade the product of their labour with each other.

Money was introduced as a REPRESENTATION of that work and effort. It acted as a store of value to be able to swap/exchange the effort expended in digging potatoes at one time of the year with other products (product of one’s labour).

Perhaps one of the biggest misconceptions today is that the TOKEN is valuable instead of a REPRESENTATION of value. The origin of the value is the energy and effort expended by those who produce. Production need not be limited to things… information is valuable to some.

“Value” is that which one acts to gain and/or keep. The concept “value” is not a primary; it presupposes an answer to the question: of value to whom and for what? It presupposes an entity capable of acting to achieve a goal in the face of an alternative. Where no alternative exists, no goals and no values are possible. Ayn Rand

The externalisation of value into an object, whether that be gold or paper, is the same. If the origin of the value is internal, that is it is comes from one’s thought and action, to externalise that value is to disassociate thought and action from value. Warning !! Warning !! This is dangerous territory and the subject for much deeper analysis.

For now, consider what happens when the TOKEN used as money is substituted from a rare metal, that’s hard to fake, with a readily produced material like… paper or electronic keystrokes! Take a quick look into the properties of money… from the viewpoint of it as a token.

These are the commonly recognised properties for ‘something’ to be money: Source

Watch this 5 minute video and contrast how easy it is to create today’s ‘money’ out of thin air… Although I’ll dig deeper into that concept in a future article. [Edit: Money Out Of THICK Air]

Is today’s money what you’d call a reliable token to be used as money?

We are taught at an early age that interest is charged on the premise that the bank does not have access to it’s own money for the time they lend it to you. If money is created on the spot – can interest be charged if the bank never ‘lost’ the opportunity to invest money it never had?

Only In America? – Wrong!

Think that Australia is different? There’s no connection to the Federal Reserve Bank in the US? Consider the following: